If all human activity in Tibet is harmful to biodiversity and water supply, nature and culture have been fully divorced, and exist only as antagonists. The possibility of humans living in nature, with nature, in sustainability, is swept aside, as an impossibility. Extreme dualism is now normal. Until, at last, construction of ecological civilisation brings these two competing realms together anew, thanks to the wisdom and top-level design of the Chinese Communist party.

China’s scientists, attuned to official policy,  are now able to reduce the whole of Tibet to a single number, the Human Footprint Score, proclaiming its rise as a danger signal, attributable mostly to increased impacts of livestock herd numbers rather than China’s intensive investments in enclaves of extraction and urbanisation, and the transport networks connecting them. This naturalises the dominance of a single metric, which would never be administered to the overworked, overloaded landscapes on the other side of the Hu Huanyong line. Imagine the Human Footprint Score (HFS) for the polluted, overcrowded, industrialised and highly urbanised provinces of eastern China. But the focus of Chinese science, and central planning, is on Tibet, and the HFS numbers are increasing, by as much as 32.35% (note the precision) in only the two decades from 1990 to 2010. Further, this alarming increase is due mostly to the grazing pressure of increasing herd sizes, rather than other satellite readable indicators of human impact such as the amount of streetlamp light detectable from space, which is actually one of the five metrics constituting the Human Footprint Score.

The antagonism  between nature and any human presence in the landscape, established by the Human Footprint Score, supplies the scientific rationale for depopulating Tibet, while no one has dreamt of depopulating lowland China since Han officials of the Yuan dynasty talked their newly ascendant Mongol rulers out of killing the Han peasant farmers of northern China over six centuries ago. 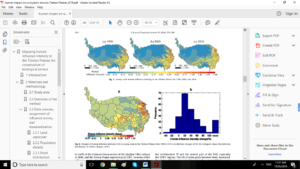 In 2018, a team of Chinese land resource geoscientists from prestigious research institutes in Beijing, Wuhan and Berlin published their HFS assessment of Tibet Autonomous Region in a respectable academic journal, Science of the Total Environment. [1] Their starting point is that any human activity in Tibet is harmful, a self-evident, axiomatically true baseline. They “considered five categories of human pressure (population density, land use intensity, grazing intensity, road and railways, and the electricity infrastructure) to map the human footprint for 1990 and 2010 in a spatially explicit way. These pressures were weighted according to estimates of their relative levels of influence on nature. Tibet has one of the world’s largest high-mountain grassland ecosystems and is a major pastoral area of China. Therefore, grazing intensity was considered to be a human pressure in Tibet, which was consistent with previous studies of the Tibetan Plateau.”

The scientific team weighted all their sat-cam generated data in accord with this initial assumption. Their frame was the years 1990 to 2010, both being census years which reveal the total human population of the Tibetan Plateau has increased greatly, from around six million in the 1950s to over ten million today, due mostly to the influx of Han and Hui immigrants to urban areas and farming districts in Qinghai.  This population increase, accompanied by rapid urbanisation and a massive capital expenditure on infrastructure and logistics, on highways, railways, hydro power stations, electricity grids, oil wells and pipelines somehow add up to a lesser impact than changes in nomadic grazing between 1990 and 2010.

From the outset, they make brazen assumptions: “Human activities pose severe threats to ecosystems. As the Earth’s third pole, the Tibetan Plateau (TP) provides various ecosystem services for human beings, including water resources for nearly 40% of the world’s population.  The eastern and southeastern TP and the central part of the Tibet Autonomous Region saw high HII. For 1990–2010, the 1 km scale mean HII increased by 28.43%, which is much greater than the global level of 9% for 1993–2009, suggesting that the TP and the ecosystem services it provided may face with more threats. HII increase was mainly observed in the northeastern TP. Rapid increase of human activities within valuable regions for water retention and biodiversity conservation during 1990–2010 were detected, especially for the former.”[2]

The mapping of the scientists is misleading, even dishonest, for several reasons. First, by taking the years 1990, 2000 and 2010 as their benchmarks, the intensive industrialisation of parts of Tibet prior to 1990 is largely ignored, especially in the Tsaidam Basin. China has extracted around two million tons of oil a year from the Tsaidam for decades, more recently large quantities of gas have been extracted and piped to Chinese industrial centres.

Second, the watersheds rising in Tibet provide water to around 1.3 billion people, not “nearly 40% of the world’s population”, a number obtainable by adding the entire populations of the sovereign territories of all state from Pakistan through to Vietnam and China, including billions of people outside of watersheds whose upstream is in Tibet. To claim 40% of humanity drinks water from Tibet relies on political definitions of nation-states, not on scientific categories of water catchments.

Third, the map, immediately usable by policy makers, does unite the entire Tibetan Plateau as a singular entity, including all 150 counties, whether they are in TAR, Qinghai, Gansu, Sichuan and Yunnan provinces. However, their unit of reporting human impact is the county, even though what distinguishes China’s human impacts is their location in specific enclaves of intensive exploitation and intensive change of land use. By generalising impacts at county level, entire counties are branded. They also map at one sq km level, which is more precise in zeroing in on China’s interventions as the locus of human impact.

Fourth, many of the most intensively  impacted counties are in areas where Tibetans have long been outnumbered, disempowered and marginalised by decades of immigration of Hui Muslim Chinese and other Han Chinese farmers, and in recent years, industrial workers in the many factories surrounding Xining, the capital of Qinghai, now a city of well over two million, making it by far the biggest city of the Tibetan Plateau, with the biggest footprint.

Fifth, these studies fail to mention the rise in human habitation of the Tibetan Plateau, from a population of six million (by Tibetan estimates, less by Chinese census data) four or five decades ago, to a total of more than 10 million, according to the latest (2010) census. This rise of at least 65 per cent is in part due to a rise in Tibetan population, but is mostly due to push and pull immigration, as Muslim Chinese join relatives who settled in Qinghai earlier in the 20th century, and official resettlement schemes encouraged immigration, or coerced it.

Sixth, their headline finding is that human impact intensity in Tibet increased by 28.43 per cent, far faster than global human impact intensity increased.  This alarmingly precise computation, aimed at China’s policy makers, makes Tibet problematic, especially those very big areas already designated as Key Ecological Function Zones, whether for water supply (misleadingly characterised in these reports as water retention) or for conservation of (unspecified) biodiversity. The baseline for comparing Tibet to the world is a single 2016 study that self-importantly claims to reduce the entire land surface of the planet to a single number signifying the impact of humans in 2009 compared with 1993.[3]

These artifices, pretending to be objective, have been thoroughly critiqued.[4]