Blog three of four on splitting the land of Tibet from the Tibetans as a people.

Tibet has become human, all too human, and that is a problem. The Human Footprint Score or Human Influence Intensity (HFS or HII) has increased considerably in Tibet in recent decades, which, China’s scientists tell us, is deeply problematic. A double standard is now entrenched, with Tibet held accountable, and failing, to meet a standard of biodiversity that no longer applies to lowland China.

In an era of big data, there is now a scientistic precision suggesting an alarming increase in human impacts on Tibet which, mysteriously, are not due to China’s “leap-style” program of industrialisation and urbanisation of Tibet, but are very much the fault of ignorant, careless Tibetan nomads and their herds of yaks, sheep and goats.

Addressing central leaders the Chinese scientists who came up with a 28.43 per cent increase in human impact in Tibet, assert: “Over the past 20 years, the county-scale mean HII [human influence intensity] increased by 31.45% (28.43%), which is much greater and faster than the global level of 9% for 1993–2009, suggesting that the TP [Tibetan Plateau] may face with more threats induced by irrational human activities. More attention should be paid to this situation by scholars and decision-makers with regard to ecosystem services and biodiversity.” That’s the bottom line: what endangers nature, which is utterly separate from human culture, is not China’s self-defined “leap-style development” of Tibet, but the “irrational” activities of herders.

The 2016 global study divides the land surface of the Earth into 772 “bioregions”, assigning a number to each for 1993 and 2009, by quantifying such quantifiables as night light, as measured by satellites. That is meant as a proxy for the intensity of urbanisation.

Since 1993 was their baseline, and their key conclusion was to compare that with a number for 16 years later, the entire industrialisation and urbanisation of the rich countries is built in to their 1993 basis of comparison. Not surprisingly, in many wealthy “bioregions” things actually improved from 1993 to 2009, while in the rapidly industrialising emerging economies, things got worse, since the whole point of the exercise was to quantify threats to biodiversity of bioregions. The main causes of a 2009 global human impact score in 2009 being worse than in 1993 was expansion of crop land, the amount of light emitted into the night sky, and human population density. Pastoralism’s global impact in 2009 was considerably less than in 1993. But, as usual, Tibet is different: it is all the fault of the nomads.

Since 1993, China has accelerated capital expenditure on urbanisation of Tibet, mineral extraction, hydropower dam construction, highways, railways, power grids and roads to all counties. Yet it is Tibetan pastoralism that the Chinese scientists singled out as the biggest threat. They assigned the highest and most threatening impact to pastoral district where human population density reaches 50 persons per sq km. Yet population density in the whole of China, including Tibet, is 151 persons per sq km.

Taken together, these six factors, all downplayed by these supposedly scientific assessments, point to a sharp increase in human influence intensity, concentrated in Tibet’s resource extraction enclaves, intensive farming zones, industrialised areas, booming urbanisation, and in the networks of highways, railways and power grids connecting them all. If human influence intensity is to be mapped, this is readily done: just follow the engineering corridors and urban boundaries. Intensification is explicitly the core of China’s productivist strategy for Tibet, and intensification by its nature is territorially specific and easily identified and mapped. The opposite of intensive land use is extensive land  use, which is what characterises the traditional Tibetan mode of production, which uses large areas lightly, grazing and then moving on to let grasses recover from controlled grazing pressure. A recent overview of all available research reports on this topic, both Chinese and international, concludes that the customary Tibetan strategy of moderate grazing, while avoiding heavy grazing, actually increases biodiversity.[1]

What if China’s scientists and the policy makers they advise applied this standard to the other side of the Hu Huanyong line, to southern and eastern China? What if they tested there to confirm that all human activity is a danger to biodiversity?

The data are readily available. One has only to look at a map of panda habitat 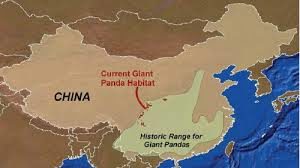 two centuries ago, compared to now, to see how pandas are now restricted, by habitat loss as human impact accelerated, to their remaining refuges in the steep, dense bamboo thickets at the foot of the Tibetan Plateau. 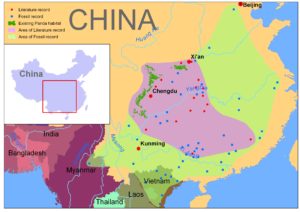 The fossil record of prehistoric panda habitat shows an even wider distribution, across most of southeastern China, where hundreds of millions of people now dominate all resource use.

What if scientists quantified China as an importer of water, draining the water resources of other countries, not by direct transfer but through its reliance on crops grown in many countries, imported into China, all grown in reliance on rainfed agriculture using unpolluted naturally “green” water. Again this footprint is readily measurable. The UN estimates that, after the US, China is the world’s second biggest water importer. [2] 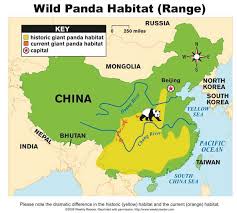 The Hu line slashes China into two realms, that operate on two different logics. To the west and north is the realm of nature; to the south and east the human realm of culture. The biodiversity remaining in the west must be protected by the superior civilisation of the east, precisely because  there is biodiversity remaining in the west even if this is a legacy of ethnic minority cultures that refused to privilege the human over the natural, or assign them to separate categories. It is precisely because there is so little natural left in the east that the question of assigning a Human Footprint Score there does not arise, is actually inconceivable. 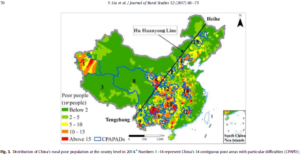 to threaten nature is the voice of the cities, high status institutes, ministries of centralised power, exercising their prescriptive discourse to reclaim the west –effectively China’s Orient- as the ultimate Other to densely packed lowland cities where wealth accumulation is the main game. Making the west the realm of nature makes the east feel it is more than the primitive stage of accumulating wealth. The concern to restrict human activity in the west makes the east a great ecological civilisation. Lands once considered to be wasteland, forbidding, inhospitable, even unnaturally cold, unnaturally hypoxic, are now to be embraced as a pure realm of biodiversity.

In some areas, everyone knows what the abstraction called biodiversity signifies, such as pandas, and implicitly a lot of other unnamed species and habitats that are incidentally protected when the last remaining panda habitat is nobly protected. In Tibet, however, biodiversity has taken on a magical status as an end in itself, without much reference. What is to be protected? Most often named are Tibetan antelopes, much less often gazelles, wild yaks, wild sheep, donkeys and horses. Rodents such as the pika (Ochotona) continue to be stigmatised as pests, or, worse, reservoirs of plague infection, to be eradicated by mass campaigns of poisoning. Behind all these mammals loom the wolf, the snow leopard, the brown bear, and other predators. The wolf is now highly popular as the model for today’s China to aspire to.

The Hu line is familiar to anyone who uses a keyboard, its shape has a familiar name: the forward slash//////////, the frontier enabling entry to our next online destination. It holds us back, then lets us rush forward, to fulfil our destiny. We must obey it, then advance. We encounter the barrier and find ourselves in an alternative universe. We press on to a more glorious future.

This insistence that all human activity is inimical claims to be the opposite of anthropocentrism, yet is an anthropocentric conceit originating in the Marxist dialectic asserting there is a contradiction between grass and animals. If such contradiction existed, all grazing systems, all dryland, extensive livestock production worldwide would be unsustainable, perhaps impossible.

The arrogant assumption that all human activity in Tibet must be stopped by the force majeure of the human activity of the party-state is a nonsense. It denies thousands of years of sustainable use of the most remote, high altitude landscapes by skilled, self-reliant, even-minded nomads who live fully in the present moment, because to let the mind wander is to not notice immediate dangers, such as falling in deep snow down a steep slope. Just watch the trailer for the quietly observant doco Shepherdess of the Glaciers. [3] 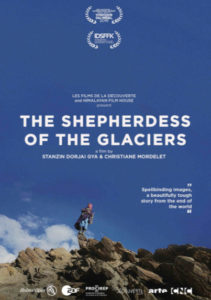 The doco maker, her brother, says: “For eleven months of the year Tsering lives at an altitude of 4,500 to 6,000 meters, in temperatures ranging from 35°C below zero, to 35°C. She is several days walk from the village. Up in the mountain, higher and higher, she walks all day long, in all weather, seeking meager pastures to feed the herd. How can she possibly survive up there? Where does she find the strength?  In fact, Tsering shepherds life – her own life as well as the life of the herd. Anticipating, nursing, protecting, delivering kids, worrying and, in the end, accepting. She and her herd engage in a daily struggle for life.  Last winter the herd lost seventy goats. The snows lasted too long, the kids died, famine threatened, the leopard struck. Tsering dealt with all these hardships. She’s not afraid of anything.

“When the possibility of marriage arose, Tsering chose to look after the herd. Denied all human company, my sister learned everything by contemplating the mountains, the elements, plants and animals. Tsering is attentive to everything, to everyone. She knows every crevasse on the glacier, all the plants that heal, the sky, the moon, the leopard. She knows every one of her goats.
All her senses go to work. 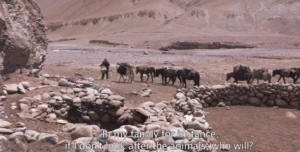 My sister is a doctor, herbalist, weather forecaster, veterinarian, botanist, Himalayan guide, economist, philosopher, and goatherd – she’s all of them rolled into one.
Every day Tsering has to cope with limits – her own physical limits, environmental limits. She knows the world is competitive, but that her only real adversary is herself. Tsering is strong.”[4]

Metropolitan China has no idea this is what it is losing, or that there is anything in Tibet to be lost by depopulating its open rangelands. Overcrowded China sees solitude as abhorrent, at the mercy of the vast and indifferent forces of nature, an existence barely above that of the animals. Tibetans know differently. There is no need whatever of invoking shangri-la romanticism, just of remembering the connection in Tibetan tradition between solitude and inner growth.

Those who do know what stands to be lost remind us that Tsering Palmo, in her solitude amid the glaciers and vastness of Ladakh, is someone we can recognise. The literary historian of Tibet, Roberto Vitali says: “Loneliness is her companion. Her father handed over the work of shepherd to Tsering Palmo. She was ten when she set out with him into the wild for the first time. He told her that a shepherd must have a head of steel. She talks about the wilderness as a friend she has known all her life. 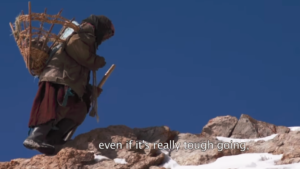 They are not places for suffering if one’s mind is as light as the air one breathes. Tsering Palmo negotiates the harshness of nature with a confidence that comes from her empathy with the environment. The camera moves in the landscape and focuses on the sister in a way that communicates a sense of unity and belonging. I thought of the great hermit masters of ancient Tibet, who, in pursuit of a spiritual life, left all attachment behind. I wondered whether Tsering Palmo Zemskhang should be considered a special breed of human being. I think her traits are typical of a khandroma, a dakini or ‘fairy of the sky’. But she claims she has no knowledge, only a stick in her hand and a basket on her shoulders. Her attitude is a sign that she doesn’t miss an iota of this insight. She stays away from everything else to meet her world -rich and intense.”