In several Rukor blogs, we have explored the nationalisation of the Tibetan Plateau by a party-state keen to inscribe its ownership, active management and its sovereignty over vast lands it has never had much use for, or understanding of.

Nationalisation is a word summing up this assertion of exclusive sovereignty, China’s solution to the inherited problem of conquest, almost three centuries ago, of huge areas of inner Asia which today include not only Tibet but the new realm of Xinjiang as well. As all contiguous empires discover, conquest is the easy part, even if it took many attempts before succeeding. Then what?

When a vast empire, ruled by a distant capital, filled with conquered subjects who do not identify with their conquerors, what to do? This is the core dilemma of the conqueror, a long-term problem which academics 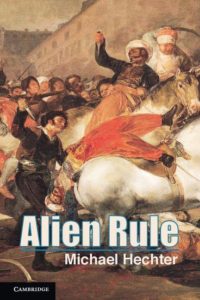 who have taught in China have also considered in depth. [1]

The globally scattered empires of the European powers had different problems, limited to strategies for maximum extraction of commodities and wealth, from lands they conquered but had no need to settle, unless settlement of migrants from the metropole suited imperial interests. For the Europeans maximising extraction means installing the conquerors as apex predators, positioned by force at the top of the food chain, supported by an indigenous hierarchy of local rulers and rent seekers, clients of the new elite. Not much more is needed, other than a rationale making it all seem like a civilising mission that is all for the welfare of the natives.

Conquerors of contiguous empires connected overland to the metropole don’t have it so easy. The conquered must become nationals, alien rule must become acceptable, identities must shift from local loyalty to ethnos towards loyalty to the nation-state as primary. This is a massive task and a multi-generational one. Social engineering of identity formation takes time and strategic skills. 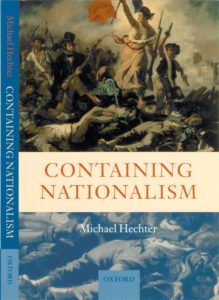 The transfer of loyalty, from clan and tribe and nation to the modern nation-state requires an ability conquerors seldom have, to acknowledge and respect difference, to accept that the conquered do not share the same values as the conquerors, nor do they see their conquered lands the way the conquerors do. Those lands are home, not a distant outpost of frontier land of unknown potential.

If that distinguishes conquest from rule, China has failed to effectively rule Tibet. This is for many reasons. The conquests of the Qing dynasty three centuries ago were not followed by a program of sinification, of imposing Chinese characteristics, beyond imperial patronage of high lamas, and much imperial show of favour to hierarchs of Tibetan Buddhism. On the ground, in Tibet, Qing power faded and, by the early 20th century, was barely felt. When revolutionary China fought its way in, in the 1950s, it had to begin again, and took at first the route taken by the East India Company, of patronising the Tibetan aristocracy, keeping them well supplied with silver dollars, buying their loyalty for most of the 1950s.

That classic colonial strategy failed eventually, as more Tibetans in central Tibet became aware that in both Kham and Amdo the people’s republic waged full-scale war against Tibetans, sending waves of (disliked) refugees fleeing to Lhasa for shelter.

In hindsight, the 1959 uprising in Lhasa, which ended the tacit pact between the occupying People’s Liberation Army and the Tibetan aristocracy, could not have been at a worse time. Mao’s insistence that human will –especially his will- would overcome all obstacles, human and natural, was peaking, and he ruthlessly dispatched any who dared question him. The whole of China, and Tibet, were about to experience famine as a result. Tibet went overnight from “feudal serfdom” to what Tibetans experienced as a deeper slavery, their lives at the whim of commune cadres awarding work points redeemable as survival rations, granted to those who not only worked hard but chanted the right class warfare slogans and denounced all they had held dear. By 1959 Mao had crushed all flowerings of dissent, was fixated on a crash program to attain nuclear parity with both the US and USSR by insisting that human will overcomes all obstacles. Mao was the helmsman, able to inscribe his beautiful thoughts onto the blank minds of the masses, without interference from anyone.

The Tibetans had been exempted until 1959 from the rapidly accelerating great leap into heavy industrialisation by squeezing the peasants in who name the revolution had been fought. Mao had a high Stalinist dream of military industrialisation which required mobilising the entire population, without exception, to  surrender their few possessions and small plots of land to the command-and-control communes, which were to be the short cut to attaining a full suite of nuclear missiles fast. 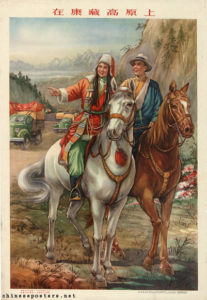 After 1959 Tibetans were no longer exceptional, and went immediately into the promised new heaven on earth, which required class warfare, struggle sessions, denunciations, liquidations and smashing everything old. The entirety of Tibetan history, culture, identity, mind training and mode of production were all classified as the four olds, to be swept away to make room for the new.

New China, dismounting from the conqueror’s horse in order to rule, never made any serious attempt to understand the conquered, nor to apprehend the pastoral mode of production that was uniquely suited to dryland, upland landscapes. Revolutionary iconoclasm had nowhere any space for Tibetans to both be themselves and negotiate their entry into modernity.

Once the revolution so nearly bankrupted China, and Mao had died, a new beginning was possible. Replacing Mao’s grand narrative with feeling for the next stone in order to cross the river was a step towards not only opening up private economic enterprise but also opening minds to the messy business of making life up, according to whatever arises. The early 1980s was a time when China made moves to inculturate. CCP General Secretary Hu Yaobang acknowledged the party had made many mistakes, and urged Han Chinese cadres stationed in Tibet to learn Tibetan.

It never happened. The new class had nothing to gain by seeing the world through Tibetan eyes. Cadre promotion was determined by success in fulfilling production quotas, or at the least producing plausible statistics announcing greater production, and the introduction of new pillar industries such as intensive logging of Tibetan forests. The regional autonomy law of 1984 was a high point. By 1987 it was clear Hu Yaobang’s reforms were going nowhere. In Lhasa, Tibetans revolted and were crushed by the garrisons of PLA troops dug into every Tibetan town. The liberal moment had passed and, by 1989, had vanished across China when the tanks smashed their way into Tiananmen. The space, in which China might learn something about the nature of Tibet, from Tibetans, closed.

Tibetans were acknowledged as different but their convergence with the Han norm was also deemed a historic necessity, indeed an inevitability.  Republican China under Sun Yat-sen had declared the Tibetans one of the five great families that together constitute the Chinese nation, a way of accommodating and encompassing difference within a wider sameness.

Communist China repudiated this formula, and the coloured five stripe flag that went with it, while eventually adopting something similar. By the beginning of this century, driven by high-level fears that the Soviet collapse was due to ethnic minority separatism, the regional autonomy guaranteed by the 194 law was deliberately and systematically downgraded, with minzu redefined no longer as nationality, becoming merely the personal choice of individuals of cultural preferences.

At no point since the reconquest of the 1950s has China shown much curiosity about Tibetan language, culture, lifeways, modes of production as the foundations for modernity. With the exception of a few liberal years in the early 1980s, Tibet has been consistently seen as barren, harsh, unnaturally and dangerous cold and with life-threateningly thin air, a backward, poverty-stricken land that is unproductive, the Tibetans wasteful of its vast area and mineral treasures, indifferent to wealth accumulation, lacking in almost all attributes of civilisation.

Yet the task of the rulers of contiguous empires persists: how to make alien rule acceptable? The CCP not only wants the Tibetan and Uighur masses to love the party, they have made such love mandatory. This is self-defeating.

Despite the enormous differences between China in 1949 and now, there are continuities. When CCP Secretary Hu Yaobang toured Tibet in 1982, and instructed cadres to learn Tibetan, he was ignored. To this day, few Han have learned Tibetan, which only heightens Han fears that even Tibetans who dutifully profess their love for the party-state, in private deny it. For sixty years –the six decades in which China has vigorously attempted to actually govern Tibet- the starting point has always been that there is nothing to learn from Tibetans, not even how to manage landscapes so different to lowland China, in ways that are both productive and sustainable.

Much has also changed in those six decades. Revolutionary enthusiasm to sweep away all that is old may have caused contempt for all things Tibetan , backed by certainty that history is with the necessity of revolution, and any Tibetans who demur are victims of false consciousness. Today, faith in revolutions that can level mountains by sheer will are a faint memory best forgotten; yet certainty remains that Tibet is backward, lacking in all endowments conducive to progress, and is objectively, if left to persist with its traditional mode of production, a drag on delivery of environmental services. The new objective necessity for ignoring or even excluding customary lifeways is scientific, not revolutionary, but the conclusion is the same: for the good of Tibet, customary land use must end. Reducing human activity across the Tibetan Plateau is necessary to ensure provision of water to lowland China, to conserve biodiversity, to resolve the contradiction between grass and animals. 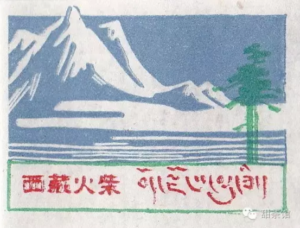