Blog one of two on UNESCO WORLD HERITAGE IN TIBET: 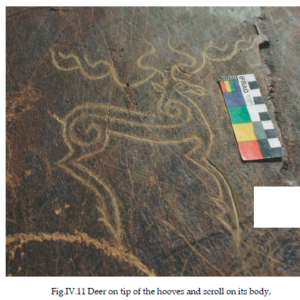 June 2017:  One month before the UNESCO World Heritage Committee is due to decide the fate of a large portion of the Tibetan Plateau, documentation has been released giving us a detailed picture of what China proposes, what WHC must decide at its July 2017 meeting in Krakow, Poland, and what is at stake.

China’s nomination of Koko Shili (Hoh Xil in China’s spelling) is, on paper, all about one iconic species: the Tibetan antelope, although nowhere is it given its’ Tibetan name: tsö. Other species are mentioned too, but the Tibetan livestock producers who for decades protected the tsö from hunters are mentioned largely in passing, as a vague presence who are to be blamed for overgrazing, even in a landscape UNESCO experts call pristine.

In order to independently assess China’s voluminous (but secret) nomination papers, UNESCO WHC sent a mission to Koko Shili as the 2016 winter approached, and their lengthy reports are now online. The fine print of what they found is worth close attention, as it tells a different story to China’s master narrative. These two blogs delve into the fine print that the WHC ambassadors, assembled in Krakow 2 to 12 July 2017, will never bother to read. Unless Tibetan voices now give them reason to look beyond the bottom line recommendations. 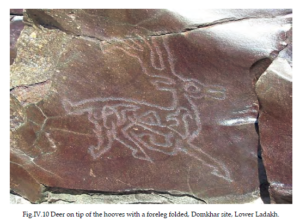 EXEMPTING THE LHASA RAILWAY FROM THE PROTECTED AREA

Rukor readers may recall from previous blogs on Koko Shili in October 2016 and May 2017 that China has carefully defined the boundaries of the proposed World Heritage area with a railway/highway/ultra-high voltage grid/optical fibre cabling and oil pipeline running right through the middle of it, for the full 250 kms north to south traverse.

This is no accident. If China was solely concerned with protection of the Tibetan antelopes, it would have included their full migratory range, for a species whose pregnant females travel great distances to give birth safe from predators, across provincial boundaries beyond Qinghai, in both Xinjiang and Tibet Autonomous Region. However, many of those birthing grounds are not part of this plan, even though the UNESCO experts rather wish they were included, but aren’t about to insist.

The rail/highway/power grid/telecoms/oil pipeline is proudly known in China as the Qinghai-Tibet Engineering Corridor (QTEC), a triumph of man over nature. Now, from a close reading of UNESCO documentation, we discover that QTEC is not technically part of the proposed World Heritage area, except as vaguely designated “buffer zone.”  This exemption has not been disclosed before. To be precise, the entire 250 kms of QTEC as it slices across Koko Shili is now defined as being four kilometres wide, probably two kms either side, excluding UNESCO from any power to limit human use, as the huge trucks en route to Lhasa thunder by. The migrating female antelopes will have to navigate across QTEC without protection.

This is not the first time China has cleverly excluded economic production zones from the heart of “protected areas” in Tibet given UNESCO’s approval and brand equity. In the Three Parallel Rivers protected area of Yunnan, the actual rivers are excluded from the defined protected area, allowing China to now proceed with hydro dam construction, power grid construction and other development. UNESCO made that mistake in 2002, and has regretted it ever since. But whenever UNESCO protests about dam and power grid construction, China says: none of your business. 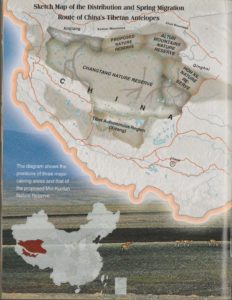 Anyone who has taken the train to Lhasa knows the entire route is elevated, on high embankments and bridges, essential to maintaining a steady temperature in a land of seasonal permafrost. This engineering necessity succeeds in keeping frozen earth frozen, and the rail track safe from slumping dangerously in the intense Tibetan sunshine. It took China’s railway engineers decades to design those embankments and bridges, a great achievement they boast about in dozens of articles in obscure journals such as Cold Regions Engineering.

Those high embankments and to an extent the many bridges are a barrier to the free migration of the pregnant tsö antelopes seeking their safe calving ground. The antelopes have learned, from the intrusion of Chinese gold rush miners in the 1980s, to fear humans, even though wild antelope herds historically mingled unhindered with Tibetan nomad domestic herds. So now we have a 4km wide QTEC corridor right in the heart of a World Heritage protected area, over which UNESCO, if they rubber-stamp China’s nomination, will have no control over.

The experts UNESCO sent to Koko Shili make clear they aren’t happy with this 4 kms wide zone of exemption, but the bottom line is they don’t insist on making UNESCO approval conditional on the inclusion of QTEC. Once China implements its plans for a massive domestic safari tourism industry in QTEC –as has happened in other UNESCO World Heritage sites in Tibet, notably Jiuzhaigou, UNESCO will be helpless to protest.

The UNESCO experts restrict their critique to the fine print. The actual recommendations for decision impose no such conditions. Very few people will ever read the fine print, including the ambassadors from the 21 states currently on the UNESCO World Heritage Committee, who need only to know what decision is recommended, and vote for it. The nearest the experts come to dismay is to state: “These buffer areas that are internal to the property are covered by the same legislation as the rest of the Nature Reserves, and in principle IUCN considers it would benefit the protection of the property if these areas were eventually to be added to be part of the inscribed property, rather than remaining as buffer zones. Whilst noting both scopes to further improve buffer arrangements, and to also consider future extensions to the area currently nominated, IUCN considers that the boundaries of the nominated property meet the requirements of the Operational Guidelines.”

“No monitoring of the animal mortality due to the highway (and other corridor infrastructure) is in place to assess this impact, and no management response is currently being undertaken for other species. The traffic on the highway is growing due to development occurring in the Tibet Province, and the road will remain a conflict in the future if relevant management responses are not met.”

In many ways, the experts sent by UNESCO did a great job, mindful that both UNESCO and its science partner the International Union for Conservation of Nature (IUCN) express great concern for indigenous communities, local conservation, participation, joint management of protected areas, and all the jargon of cultural inclusion. Even though china repeatedly insists that Koko Shili is “no-man’s land”, the UNESCO experts did identify precisely how many Tibetans remain in the area scheduled for World Heritage status.

The IUCN TECHNICAL EVALUATION QINGHAI HOH XIL (CHINA) – ID N° 1540, as it is formally called, is the result of ten days in Koko Shili, by the former director of the WWF Mongolia office, Chimed-Ochir Bazarsad, and a Swiss-based scientist, Carlo Ossola. Bazarsad and Ossola investigated in depth, even if they stop short of requiring China’s compliance with IUCN and UNESCO’s professed standards.

They met not only with officials responsible for running wildlife protection programs, but “a wide range of stakeholders including national level officials from the Ministry of Housing and Urban-Rural Development.” This is crucial, since the entire Koko Shili proposal, located in alpine wilderness “no-man’s land” is owned by the Beijing-based Ministry of Housing and Urban-Rural Development (MHURD), not by a conservation or environmental protection agency. In remote areas MHURD owns and runs scenic spots suitable for development as tourism destinations, a clear sign of what China has in mind. MHURD’s main job is in the cities, worrying about real estate booms, property speculators, and the danger of the bubble bursting. However, MHURD will remain in charge in “no-man’s land”. UNESCO tells us: “According to the Conservation Regulation of the Hoh Xil Natural Heritage Area in Qinghai Province, adopted by the Standing Committee of Qinghai Provincial People’s Congress, valid from October 2016, an administrative authority for the nominated property will be set up under the Department of Housing and Urban-Rural Development of Qinghai Province to assume protection and management responsibility for the property.”

“No-man’s land” notwithstanding, this huge area is populated by those Tibetans not already removed to a distant urban fate, by decree. The evaluation report states: “According to the nomination, there are 35 households of 156 herders within the nominated property, and 222 households of 985 herders and 250 other residents in the buffer zone. The activities of nomadic herders are a long-standing and traditional use in the property, and has coexisted with the nature conservation values. The level of involvement of the local communities and users in the preparation of the nomination proposal seems limited and unstructured. The management plan elaborates a section on community involvement and development, including a pilot programme for participative management approaches in Sanjiangyuan Nature Reserve, and there is involvement of local communities in monitoring activities. The nomination refers to overgrazing, and the introduction of new grazing activities as threats and notes that grassland deterioration and desertification is observed as a result of overgrazing in some parts of the Soja-Qumar sub-zone.”

This immediate slide, from population numbers to accusations of overgrazing, is standard rhetoric of a Chinese state that has never understood the logic of pastoralism, and defines any and all grazing as a loss of biomass, and therefore a danger. In almost the same breath, the remaining human population of Tibetans is introduced, and labelled criminal.

Many conservationists worldwide are willing to believe this, despite the lack of evidence; and the new evidence that climate change is making this land wetter, warmer and more productive. It has long been inbuilt to the science of ecology that humans are not part of the ecosystem, are additional, and by definition a threat. This is classic dualistic thinking, either/or, zero/sum approach in contrast to the productive Tibetan assumption that out on the rangelands there is plenty of room for wild animals, domestic animals, grass and water.

UNESCO’s expert evaluation mission is somewhat worried about China’s approach: “Currently the nature reserves are responsible for controlling grazing activities, and the nomination notes that across the large part of the property, the management agency will ‘gradually impose a ban on herding among sparse residences in the resettlement area and further consider specific voluntary resettlement policies, locations, compensation mechanisms and other measures that can promote the wellbeing of the resettlements.’ Herders in the buffer zone are being engaged in grassland conservation and livestock reduction policies, and local herders have been organized to participate in the conservation practices. The evaluation mission heard concern within the local population regarding being displaced or resettled as a result of the nomination process and outcomes, and several reviewers raised the issue as of concern. IUCN considers that it is imperative that questions of rights, access and traditional use are addressed rigorously and carefully by the State Party [China], in full consultation, and the World Heritage nomination must not be used to justify any deprivation of traditional land use rights of the concerned communities.  In response to concerns raised, the State Party has stated unequivocally that there will be no forced relocation or exclusion of the traditional users of the nominated site, whether before or after succeeding in the application for World Heritage site.” 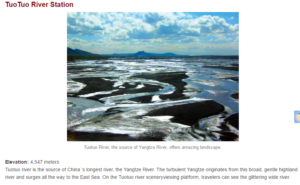