“You cannot step onto the same pasture twice, as Heraclitus might have said if he’d been a nomad.

I come from a nomad family in Tibet. My European friends seem to see grasslands as eternal, and also terminally boring because the eye travels so fast to the horizon, unlike the rainforest,  the holy grail of the modern unchurched, which by comparison evokes awe.

Our Tibetan pastures change all the time, there is no equilibrium for scientists to find. How could it be otherwise on the highest, driest and coldest plateau of the planet? Only the nomads, with their yaks, sheep and goats, know how to make this huge land habitable, know its moods, the gales that blow out of nowhere, or blanketing blizzards even in summer, while India swelters. The alpine meadows are neither dull nor eternal but they are every bit as diverse and productive as those magical rainforests.

This comes as news to China, now in command of the Tibetan pasture lands. China has a bad habit of calling even our richest pastures waste land, because it is not arable, not suited to ploughing and farming. China sees our hardy, resourceful, skilful nomads as ignorant herders wandering aimlessly behind their animals in search of grass, almost the definitive uncivilised barbarian. This leads to a command economy which pushes and pulls the nomads who range extensively over an area the size of Western Europe, nudging them ever closer to poverty and landlessness.

First came the communes, far too large, run by cadres with no idea of rangeland dynamics, determined to prove the virtues of communism by rapidly raising herd sizes, pushing land and people too hard. Then in the 1980s China went to the opposite extreme, contracting separately with each nuclear family for land tenure over land parcels that had to be fenced, driving nomads into debt. The intention was to incentivise nomads to care for what they had always cared for, but the allocated land was too small, usable in winter only, incurring further compulsory debts for fencing, ploughing, seeding and harvesting fields for fodder, and the compulsory construction of permanent houses.

The idea was to modernise, intensify, and increase production. The outcome was perverse.

In reality the herds concentrated on officially allocated land inevitably became over grazed, because nomadic mobility, the secret of 9000 years of successful Tibetan pastoralism, was restricted, then stopped. Since 2003 the policy has been to ban grazing in ever increasing areas redefined as watershed protection zones and redline demarcated national parks, excluding all human use. This is deemed an objective scientific necessity because the nomads are to blame for the land degradation caused by privatisation and parcelling our lands. Hundreds of thousands of proud and skilful nomads now lead wasted lives in concrete cantonments on urban fringes, their bitterly cold brand new concrete barracks a holding pen for folk deemed redundant to the dream of a modern meat commodity production chain.

This is done in the name of conservation, carbon capture, restoration of environmental services. Conservationists should look a bit more closely at what that means on the ground. As the world contemplates a Paris climate accord we pose questions  whose answers may not be what you expect. How much longer can our melting Tibetan glaciers feed year round the great rivers of Asia? The thousands of kilometres glacier-fed rivers traverse the Tibetan pasture lands before plunging to the lowlands are not threatened by grazing, but sustained by intelligent, flexible, mobile light grazing herds, wild and domestic. Those pastures filter, clean and regulate the flow, as well as sustaining an extraordinary diversity of medicinal herbs and nutritious grasses. 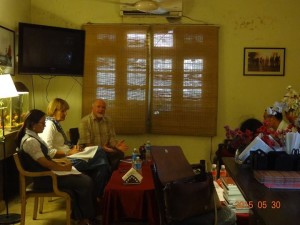 What is achieved by grazing bans, exclusion zones, wasted lives, massive internal displacement and counterproductive policies? Chinese and international scientists now report that the biomass of grass does increase, at least in the few years immediately after grazing is banned, herds and herders removed. But most recent scientific reports tell us that carbon capture is greater when there is steady grazing,  and that ungrazed pastures, fenced off to exclude wild antelope and gazelles as well, suffer invasive species invasion, loss of biodiversity, reversion to shrubland and the crowding out of medicinal herbs.

You can’t step onto the same pasture twice because it’s not the same pasture, it keeps changing, just like Heraclitus’ river. Those who aren’t intimately connected to grassland may not notice many of those changes, but we do, and now a new generation of Chinese and Tibetan scientists does too. China wants to build an eternal, unchanging pristine grassland wilderness on those pastures. We Tibetans want a chance to show that our traditional mobility is the best kind of community-based conservation, is both sustainable and productive, and can lift us out of poverty, if the command economy can let us prove it.”

Tsering Tsomo is director of the Tibetan Centre for Human Rights and Democracy. This is her summary of TCHRD’s latest report, Wasted Lives: a critique of China’s campaign to end Tibetan pastoral lifeways.

This entry was posted in Tibet. Bookmark the permalink.