“Is it true that in your country you can touch the clouds?”

The question was composed by a Han Chinese student practicing his English, in a conversation class in Xining, to be answered by the guest for this class, a Tibetan fluent in Chinese, English and of course Tibetan.  The questioner’s English was halting, tentative, expressing a naïve Han fascination with Tibet, so near to Xining, as another country altogether, so high in the sky you brush against the clouds. Diplomatically, his Tibetan interlocutor agreed.

Now China wants to touch those clouds with toxic silver iodide, to force more rain over Tibet, collectable and usable by downstream China. If the naïve, tech-fascinated report in Hong Kong’s South China Morning Post is to be believed, China is about to install not just the occasional rainmaking machine spewing silver ions at Tibetan clouds, but hundreds, probably thousands of such machines, perched high on Himalayan ridgetops, roaring with rocket fuel to melt the silver iodide and get it into the stratosphere.  The proposal, announced as certain to go ahead, is to upend military rockets, not flaming down to lift a payload up, but facing down, to flame as high as possible, aided by the winds of the Indian monsoon, up into the clouds, bearing particles of silver iodide to make the clouds cry, and yield their cloud juice. 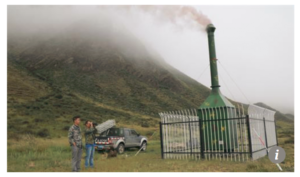 Since Tibetan voices are so seldom heard in China, Tibet is a vast blank canvas onto which Han Chinese can project any fantasy, but the grandiosity of this one is amazing. It will cause more rain over Tibet, and China will be the beneficiary. The monsoon and the mountains will be tamed, made to serve human ends, the clouds will be conquered and yield their much needed liquid treasure, specifically for northern China, where it is most needed.

On reflection, there are a few problems with this grandest of narratives. Where to begin? For starters, the basic idea is that it will no longer be necessary to send up planes, to burn the silver iodide on their wingtips to scatter it directly into clouds and precipitate rain; now, thanks to the updraft of the Indian monsoon over the Tibetan mountains, ground-based burners can do the trick.

The boosters of this proposal assure us that this will get the silver iodide an extra kilometre higher, and presumably that’s enough to seed those clouds, since everyone knows you can touch them. 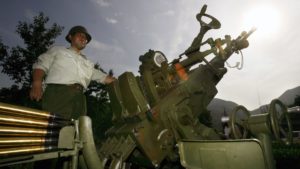 Possibly, on the southern flank of the Himalayas it might work, but the southern flank is not in China, and the rain is needed not in the Himalayas, where it would flow into the Yarlung Tsangpo and out to India and Bangladesh; but far to the north, in Amdo/Qinghai, which does have its mountain chains too, though nowhere near as steeply ascendant as the SCMP Hong Kong graphic supposes.

Cloud seeding is a technology that has been around for decades, with at best inconclusive results. Most countries, having tried it, have given it away, for the basic reason that there is very little data indicating the result is more rain than what occurs without human intervention. After all, the only time for seeding clouds is in the monsoon season, in summer, when it is going to rain or snow or hail anyway.

Then there is the problem of how to get solid rocket fuel supplies to hundreds of burners set up on remote mountain ridges, in an area, the SCMP confidently tells us “of about 1.6 million square kilometres (620,000 square miles), or three times the size of Spain.” That is two thirds of the entire area of the Tibetan Plateau, spanning five Chinese provinces. 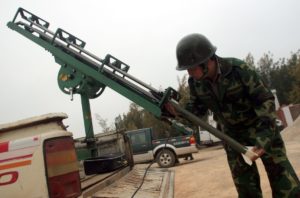 This also ignores how those monsoon winds actually travel round the plateau. After sliding through passes in the Himalayas, the summer rain-bearing clouds are deflected towards the east, by the jet stream, and then they slowly do an anti-clockwise circumambulation around the plateau, usually exhausting their moisture well to the north, in Qinghai. That’s the natural pattern, and climate change seems to be not only rapidly warming Tibet, but also increasing the rainfall. So what guarantee is there that what will happen anyway is going to be enhanced by upside down rockets thundering at Tibetan skies?

Nonetheless, SCMP readers are assured, this is a project sure to go ahead, because prestigious Tsinghua University is involved, but above all, because the military industrial giant CASC is onto it. Nothing like a missile builder, to ensure project delivery. CASC is state-owned, starting life back in the 1950s as No.5 Research Academy of the Ministry of National Defense.

CASC’s major breakthrough, according to the excited SCMP story, is not only turning the rockets upside down, but in figuring out, in hypoxic (low oxygen) Tibetan mountainscapes, how to get solid rocket fuel to burn well. 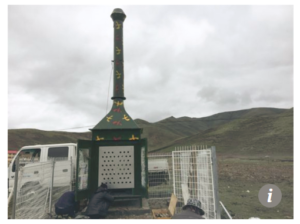 So far, so good. Maybe a few more breakthroughs will be needed before new era China decides this old era tech is the solution to excessive water use in the Chinese lowlands. It’s just possible that something even more old-fashioned, like water demand management, even making farmers pay market rates for wasteful flood irrigation, might do just as well, at a tiny fraction of the cost.

Then there is the toxicity of silver iodide falling back to Tibetan earth, with the rain. As long ago as 1970 scientists warned that: “The silver ion is among the most toxic of heavy metal ions, particularly to microorganisms and to fish. The ease with which Ag (silver) forms insoluble compounds, however, reduces its importance as an environmental contaminant. Ag is not likely to concentrate to harmful levels through either terrestrial or aquatic food chains. There is some possibility that Ag from cloud seeding will retard growth of algae, fungi, bacteria, and fish in fresh water; additional laboratory investigations are needed. Inhibition of aquatic microorganisms would interfere with the cycle that returns essential nutrients to the water. Ag in air and water should be regularly monitored.” 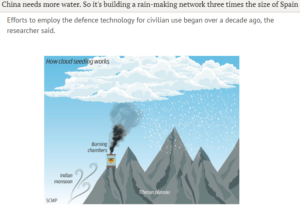 More recent research, in 2016, focussed specifically on repeated emissions of silver iodide, as happens with a burner in a fixed position, warns that it: “induced a significant decrease in photosynthetic activity that is primarily associated with the respiration (80% inhibition) and, to a lesser extent, the net photosynthesis (40% inhibition) in both strains of phytoplankton and a moderate decrease in soil bacteria viability. These results suggest that Agl from cloud seeding may moderately affect biota living in both terrestrial and aquatic ecosystems if cloud seeding is repeatedly applied in a specific area and large amounts of seeding materials accumulate in the environment.”[1]

Since much of Tibet is officially to be depopulated, in order to strengthen Tibet’s designated classification as Key Ecological Function Zone, specifically for water supply uninterrupted by nomads and their pooping animals, the toxicity of repeated cloud seeding does not worry CASC, or the enthusiasts at SCMP.

But the tech bros do acknowledge some problems remain, for example, how to fire those inverted rockets at the sky at just the right moment to induce rain. That has in fact been the main reason most countries, other than China, have largely given up on rain making by seeding clouds with silver. Scientists worldwide argue that, at most, cloud seeding generates rain with the aid of the silver, when it would have rained anyway a few kilometres away. If there is reason for such precision, such as protecting a specific crop, in a specific field, from imminent hailstorm, that could be reason enough to blast the skies. But if the purpose is to make it rain across entire watersheds, over an area of 1.6 million sq kms, does it matter if that rain falls here or 10 kms away?

Put simply, who will fire up the burning chambers, knowing this is the right moment? Their location, upslope on mountain sides, will be so remote there is no question of having personnel stationed on site. It will all be done remotely. So how to know when? CASC, a major builder of satellites, has the answer: “The chambers’ daily operation will be guided by highly precise real-time data collected from a network of 30 small weather satellites monitoring monsoon activities over the Indian Ocean.”

China’s central planners are unlikely to fund such a ridiculous scheme, even if CASC has its media friends willing to fly a few kites, as do military industries in western countries, to drum up a bit of nationalist excitement. 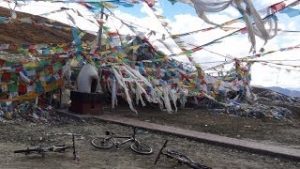 Tibetans, especially farmers with ripening crops to protect, have a long tradition of steering rain and hail away from spoiling the harvest, and many prayers and rituals to obtain results.[2] The village ngagpa yogis who do this work need no rockets or silver iodide blasted at the sky to force it to obey human command. These ritual specialists are well known, some even famous. “One of Tibet’s most famous twentieth-century weather controllers was Ngagpa Yeshe Dorje. In 1959, having fled Tibet, he spent nine years in Darjeeling carrying out the rituals of making and stopping rain and hail.  In such ways, Tibetan Buddhist practitioners, past and present, show themselves proficient in shamanic power while maintaining important distinctions between themselves and other ritual specialists.”[3] Rocket scientists need not apply. 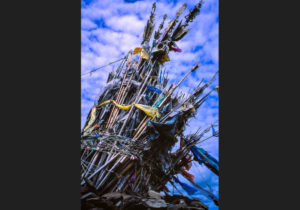 If, as the SCMP puffery confidently predicts, there actually were tens of thousands of “burning chambers” all over Tibet, one on every ridgetop, they would uncannily mimic the Tibetan lhatse that make a ridgetop into a pass, from one valley to the next, built to proclaim: “Victory to the gods!” Those ridgetop lhatse, where travellers pause to honour the gods of earth and sky, throw paper lungta to the winds and yell “lhagyalo”, are usually filled with arrows pointed down to the earth, to subdue grumpy earth spirits.

China’s proposed tens of thousands of burning chambers, rockets turned to face down, are designed to spew skyward a toxic offering to the gods. What works best? Requesting the gods to bless us, or commanding them to deliver? 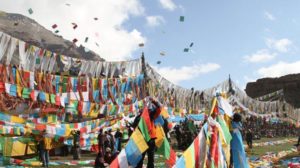