A BRIEFING FOR MEMBERS OF THE EUROPEAN PARLIAMENT, BRUSSELS, 16 NOV 2015

At a time when we are preoccupied with immediate dangers, it is wonderful to find an audience willing to consider the long term. All too readily the long term danger is pushed aside by the threat before us now, and the long term fades from view.

Yet we must also accept responsibility for the long term, and that is why the world will shortly meet in Paris, to finally take meaningful action over climate change, with every country contributing, in the hope we can avert cooking the planet. We have found time for the long term, despite the immediacy of other threats.

When we consider the unique situation of Tibet, we discover we are dealing with a second long term danger; in fact the long unresolved conflict over Tibet now intersects with the long term climate warming, in disturbing ways.

Because the world has seldom found time to consider Tibet, focussing instead on violent struggles that always take priority, the Tibetan situation is known as a frozen conflict. This climatic metaphor is apt: frozen conflicts may not be hot, but they do not go away either, they remain unresolved, and there is a price to pay, as we shall see, including a climatic price. The two conflicts, of Tibet and climate, do intersect, in surprising ways.

The Tibetans are keen to contribute to the climate debate, and to participate in finding planetary solutions. The leader of Tibetans in exile, Sikyong Lobsang Sangay, recently summed up the Tibetan climate situation succinctly, in an article in The Guardian. He points out that Tibet is indeed the roof of the world, is heating fast, permafrost and the glaciers are melting at an alarming rate, and over one billion people rely on Tibet, Asia’s water tower, for their daily water needs. He highlights China’s plan to dam all major Tibetan rivers for hydropower, and China’s policy of removing the Tibetan pastoral nomads from their pastures, pleading for these improper policies to be reconsidered.

But how are all these issues interconnected?  How does the frozen conflict, and the silencing of Tibetan voices within Tibet, interact with global climate warming?

First, climate scientists have come to realise that all local and regional climates are interconnected, affecting each other. The climate of Tibet affects the whole planet, and cannot be thought of as a peripheral or remote question. The Tibetan Plateau is a vast island in the sky, four to five kilometres up into the troposphere, with the many mountain chains a further 3000, even 4000 metres higher still. The Tibetan Plateau is the size of Western Europe, and its bulk, its seasonal cooling and heating directly affect the atmosphere, right across the northern hemisphere. The jetstream that meanders across the planet is deflected by the sheer bulk and altitude of the Tibetan Plateau, which is close to two percent of the planetary land surface. In winter, cold polar air pushes southwards, and the Jetstream is deflected to the Himalayas, which protect India from the intense cold of continental inner Asia. In spring and summer, the Tibetan Plateau, especially the bare rock of the upper slopes, heats fast, so fast that the Jetstream switches far to the north, deflected around the northern plateau edges, thus drawing in from the far Indian Ocean the rain bearing clouds of the monsoon.

This seasonal alternation of the jetstream is a driver, an engine of the monsoons of India and of East Asia. The effects go further, as far as Europe. Climate scientists have looked along the latitude circling the northern hemisphere, from the Tibetan Plateau, across East Asia, the north Pacific, North America, the Atlantic and on to Europe, and found that air pushed into the upper troposphere by Tibet only descend when they reach Europe. So, climatically, Tibet and Europe are directly connected. What had seemed distant, long term and remote is actually in every momentary breath we take. We are truly one planet, with one atmosphere. As the Dalai Lama has said: “This blue planet is our only home and Tibet is its roof. The Tibetan plateau needs to be protected, not just for Tibetans, but for the environmental health and sustainability of the entire world.”

When we explore these interconnections further, a remarkable picture emerges. China, having prevented Tibetans from speaking for themselves, speaks for Tibet. What China has to say about Tibet’s role in the climate debate is disturbing, a distortion of the sciences of our planetary future.

China argues that, although it is by far the world’s biggest emitter of greenhouse gases, its actions in Tibet offset and mitigate the global climatic impacts of the world’s factory. China grounds its policy of removing nomads from their ancestral pastures on an official slogan: tuimu huancao, closing pastures to grow more grass. The more grass that grows in ungrazed pastures, the more carbon is captured, and the more China proves its global citizenship in tackling climate change. The result is that well more than half of all of China’s nature reserves and national parks are in Tibet, including the best alpine meadow pasture lands of the Tibetan Plateau, where grazing is now banned.

How did we get to this strange point, where cancelling the skilful and sustainable grazing economy of the vast Tibetan rangelands can be applauded as China’s contribution to climate change mitigation? To answer this question, we need to look overall at what China envisages as the uses, and future of the Tibetan Plateau.

Science plays a leading role, as the Tibetan Plateau had not been scientifically categorised, enumerated, measured and uploaded into global databases only two human generations ago. Until the 1950s, China had no effective, day to day control over the land or people of Tibet. Whatever one makes of the political arguments, until the 1950s, there was no Chinese presence on the ground. China, seeing itself at the forefront of scientific socialism, was determined to discover the exploitable treasures of this vast plateau, and extract them. Scientific expeditions quickly located many major mineral deposits, as well as the sources of the great rivers, hitherto mythologised. 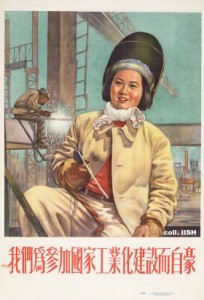 The rest of Tibet, unsuitable for classic Chinese small-scale agriculture, remains in Chinese eyes a remote and useless hinterland of wandering nomads who seem unproductive given the enormous areas they roam. The future of Tibet, spelled out in one Five-Year Plan after another, is to be an archipelago of enclaves, zones of intensive extraction, with a largely urbanised population, just like the rest of China, with the rural people shifted to urban fringes, then away from the plateau altogether, since a scattered and mobile population can never enjoy modernity. Outside of the urban and extraction enclaves, the rest of Tibet has little future, will be largely depopulated, and can best earn China global credit for being rebadged as an enormous carbon capture zone, offsetting China’s ongoing combustion of more coal each year than the rest of the world combined.

So the exclusion of the silenced nomads is packaged as a positive contribution to climate change, to REDD+ (reducing emissions from deforestation and land degradation) and to LDN (land degradation neutrality); thus qualifying China not only for the world’s approval but also financial transfers due to developing countries which forego development and in return are eligible for PES (payment for environmental services).

This is a grotesque misappropriation of the concepts of climate change and what can be done to save the planet. A rising tide of Chinese scientists openly contradicts this official narrative. Led by Prof Li Wenjun, at Peking University, this new school of environmental science fieldworkers in nomadic areas see the degradation that has occurred as a result of mistaken and improper policies that fragmented nomadic pasture lands, causing overgrazing, for which China now blames the “primitive” nomads who in fact have cared sustainably for huge rangelands for 9000 years of human use.