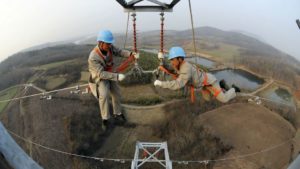 As Tibet urbanises, electricity demand now greatly outstrips supply, especially in the winter and spring seasons of low water flow and little hydropower generation, when electricity is most needed.

Outside Tibet, people often assume China rapaciously exploits and dams all rivers, yet electricity supply has fallen so far behind that TAR is now dependent on two ultra-high voltage direct current (UHVDC) long distance power grid lines to transmit electricity from both Qinghai and Sichuan all the way to Lhasa, but now these two have proven inadequate.[1]

The recent announcement that China would supply electricity to remote highland districts of Nepal, via Tibet, has only exacerbated the chronic shortages. 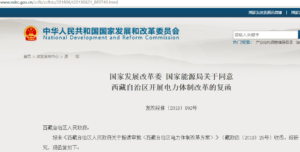 In a major 14 June 2018 policy announcement, China’s National Development and Reform Commission (NDRC)has instructed TAR to establish a market-based electricity supply, with sufficient incentives for corporations to invest in hydropower. There is almost no mention of photovoltaic solar power, or of wind power, though Tibet is well capable of providing both, being both sunny and windy, especially in winter.

We will soon see many new hydropower schemes, coordinated by NDRC central planners into three grids, one centred on Lhasa, one on Chamdo in eastern TAR, and one in the far west, centred on Ngari. Construction of these grids will be financed by the state, a major subsidy for corporate electricity generators. These three could eventually become one, interconnected by China’s tech speciality, ultra-high voltage direct current (UHVDC) power grids, which in turn could connect TAR to the rest of China, for exporting electricity down to lowland China, as has long been the plan in eastern Tibet. However, at high altitude, there are many dangers to safety of UHVDC.[2] 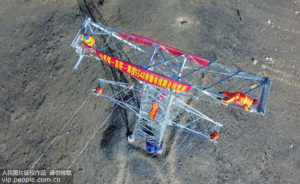 However, the problem has become urgent, NDRC says, and the way TAR authorities have managed it is intolerable. Electricity supply has been allocated to those with the best official status or connections, which means many miss out, holding back development and China’s ambition to provide electricity to remote areas, and alleviate poverty. The assumption is that power grids are needed if this goal is to be achieved, although decentralised solar power can be highly mobile, moving seasonally with a pastoral family on the move. Of the 74 counties comprising TAR, 12 have no access to grid electricity at all, NDRC says. 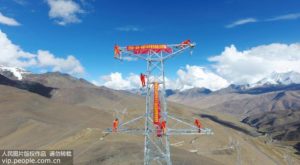 The tension between state dominance of the TAR economy, and the desire for a market economy in electricity is not officially labelled a “contradiction”, although the Marxist concept of dialectical contradiction usually defines policy debate in China. What is officially a contradiction in TAR is the relation between water and electricity. In other words, too much water flows, without being harnessed to extract electricity. This is the contradiction that must be resolved. NDRC says: “First, the problem of continuous and stable power supply has not been fully solved. The backbone of the autonomous region has insufficient power supply. The contradiction between the abundance of water and electricity is more prominent, the power transmission capacity of the Qinghai-Tibet DC is limited.”

China has in recent years prioritised water supply from Tibet, to China’s lowlands, as Tibet’s primary contribution to the Chinese economy and environment. Provision of water takes priority over pastoral production, farming, heavy industrialisation and other uses of water within Tibet. Widespread clear-cut logging of Tibetan forests was officially halted 20 years ago on the grounds that bare mountain slopes in Tibet caused flooding along the mid-Yangtze. China is willing to empty the land of Tibet or nomads, if that seems to enhance water provision, but that water must also generate electricity, according to the latest intervention from Beijing, which clearly comes with finance for grid construction, and regulatory power to fix prices sufficient to guarantee corporate investment in building hydropower is profitable.

Decades ago, when the holy Yamdrok Tso was dammed for hydropower, there was widespread anguish among Tibetans and their supporters worldwide that such a sacred lake, central to discerning portents and intimations of the rebirth of high lamas, could be so desecrated. Yamdrok Tso is what engineers call a pumped hydro dam, which feeds electricity into the grid for immediate consumption only at times of peak demand. The rest of the time, outside of peak hours, the water is pumped (from the Yarlung Tsangpo/Brahmaputra)  back uphill, effectively storing further hydropower potential till the moment it is needed by consumers. Effectively, the uphill lake becomes not just a storage pond for peak power, but a giant battery. How will Tibetans feel if lakes –traditionally the abode of goddesses- become batteries? 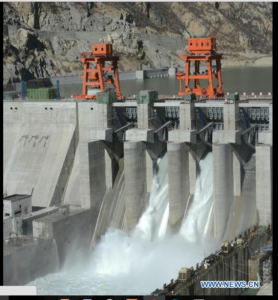 While dam building in TAR has slowed, except for the cascade of dams under construction on the Yarlung Tsangpo at Zangmu, below Lhoka Tsetang, the dam designers have been busy. They have carefully surveyed all of TAR for locations where, like Yamdrok tso, there is an upland lake and a river below that can be paired in a daily 24 hour pumped hydro cycle, or a pair of lakes, one well above the other, for pumped hydro. The engineers have found several such locations, especially in Nyingtri county, where the pace of urbanisation is fast, as Nyingtri/Bayi becomes a luxury resort area for wealth Chinese escaping the heat and humidity of Chengdu. The engineers remind us that their neatly paired lakes are almost always a considerable distance from existing grids, so much grid construction, in remote areas, will be needed. 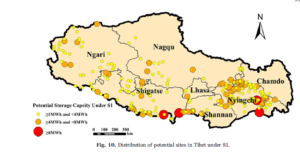 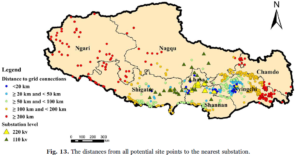 Tibet’s abundant sunshine would be ideal for decentralised solar power, but Chinese engineers use Tibet’s solar photovoltaic (PV) potential as a further argument for greater investment in centralised grid construction, connecting the solar arrays to the grid to then be fed, in the off-peak demand hours, to the lakes to pump water back up hill. Yet again, Tibet is where grand visions can be inscribed onto the land, in ways inconceivable in overcrowded, polluted lowland urban China. Electricity delivered through a central grid demonstrates the benevolence of the centralised state; electricity generated by a panel on the grass outside a nomad tent is not the gift of the party-state. 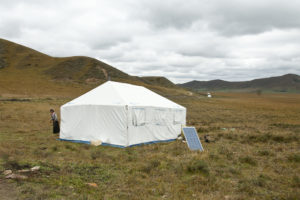 At Zangmu only the first of the planned six hydro dams athwart the Yarlung Tsangpo/Brahmaputra has been completed, and in production early in 2016.  Built by Gezhouba, financed by the heavily indebted Huaneng, the cascade of planned dam construction has slowed, partly because of dimming prospects for long distance transmission, in the absence of an adequate grid and dwindling downstream markets. 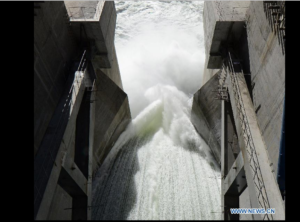 Another reason is that all of China’s major infrastructure construction projects in Tibet –railways, highways, urban construction, dams and grids- tend to squeeze construction into the summer months, as the immigrant Han Chinese workforce finds Tibet in winter far too cold to work. Gezhouba engineers even suggested intensive use of the winter sun at Zangmu, captured by solar panels, to enable construction through the winter, but little came of this suggestion, in the deep valleys where winter sun, though plentiful, seldom reaches the valley floor construction site.[3]

The directive from the NDRC is quite lengthy, yet quite lacking in specifics, other than exhorting TAR authorities to do a good job in getting more hydropower built, in conformity with national policies, including the requirement to turn farmland into forest and grazing pastures into grassy wilderness.

It is clearly up to planners in Lhasa to decide on an actual plan. So why is it necessary for NDRC to issue this public policy guidance? It is only because TAR has fallen so far behind, its regional government is so weak, passive and dependent on big brother in Beijing, and must now be instructed to make up the shortfall.

The reason this document requires eight pages is because of the complexity of ensuring Beijing’s subsidies, as they pass through the TAR government to the corporate hydro dam builders, to deliver reliable profit to the owner-operators of the new infrastructure. To ensure that, there are many things to consider. NDRC instructs TAR to allow hydro developers, for example, to be able to sell electricity beyond TAR during the summer monsoon peak electricity generating season. That will require TAR to ensure its three power grids are connected to the national power grid, by expensive ultra-high voltage direct current (UHVDC) lines capable of transmitting electricity over vast distances without loss.

BUILD IT, AND THE IMMIGRANTS WILL COME

Effectively, this is an instruction to TAR to get on with making construction contracts with the state-owned dam building companies, and raise electricity prices in order to attract them, rather than persist with low prices for existing industrial consumers, piling up debt and letting the supply lag behind demand. This NDRC directive is basically a public assurance that Beijing will foot the bill for this massive upgrade.

Who is the audience for this announcement? Clearly not the Tibetans, who are mentioned only in generalities, defined by what they lack, one million in TAR with no access to grid power. No mention of displacement and resettlement by hydro dams and power grids, that’s all for local TAR government to work out. 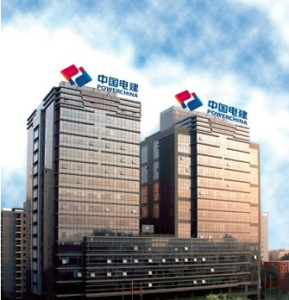 The real audience is the dam builders, who need assurances they can make money. The huge corporations who, in China, have built thousands of dams and now do so on a global scale, and the behemoth State Grid monopoly of the network, have long been dominant, not only in remote areas but in the eyes of Beijing central planners. These corporations until very recently lived in a simple world of ever-accelerating growth, with electricity demand, with the world’s factory located in eastern China, ever expanding. As state-owned corporations, they were guaranteed priority access to loans from state banks at concessional rates, and a free hand to  roam the remotest valleys to locate the best spots for damming, irrespective of local community concerns. In the first decade of this century, most of the CCP Politburo Standing Committee were engineers.

Then, in this decade, it all changed, old certainties dissolved, a new era with very different priorities was declared. The future of hydro dams, in Tibet and around China, became questionable. That’s explored further in the second of these three blogs. 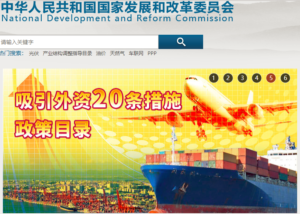