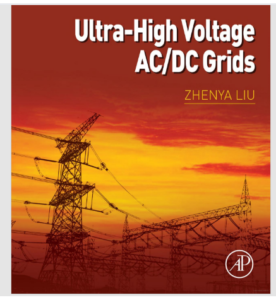 Then it all got more complex. As China moved into the middle income bracket, and wages rose, the more labour-intensive and energy-intensive industries started shifting to lower cost countries around Asia. The central planners talked more about the need to construct “ecological civilisation” and a “circular economy” that recycles. China’s sole promised commitment to realising the Paris climate change treaty goals is to reduce energy intensity. Solar, wind and nuclear power emerged as major sources of energy, even though the grid monopolists often refused to connect solar arrays to the grid.

So now it is the giants of dam and grid building who need assurance, at the highest level, that any fresh round of construction across TAR will be well-financed, including a margin for profit. TAR remains the one province where Beijing’s diktat is not undercut by local resistance, and the TAR government has been told to get on with it. The China Dialogue website has analysed how the engineering dream derailed: “China’s enthusiasm for UHV is waning. The technology is beset by conflicts of interest between grid companies and central and local governments. The lines themselves are underperforming, and more recent projects are coming online amid a period of electricity generation overcapacity. This means that approvals for new lines have slowed, and grid companies are unlikely to meet their targets for new ones. But rollouts have slowed, and few analysts expect State Grid will deliver on its 2020 target. In fact, its national UHV backbone scheme, which is the centrepiece of its UHVAC ambitions, looks unlikely to happen anytime soon. State Grid’s UHV plans suggested remarkable ambition, but did not always align with those of central and provincial policymakers. Central officials have clashed with State Grid planners on its backbone scheme, which envisions a lattice of six UHVAC lines to synchronise grids that are currently in State Grid’s territory. But officials worry about nationwide blackouts cascading across these interconnected grids. Meanwhile, the economic case for new UHVDC lines from the interior has weakened amidst slowing growth in electricity demand. Unsurprisingly, then, approvals for new UHV projects – which take 3-4 years to construct – have been slow, with just one project approved in 2016, and two in 2017. Certain regional governments targeted for UHV projects have also been sceptical. Provinces get larger boosts to gross domestic product (GDP), employment, and revenue from building their own power plants rather than importing power from other provinces. Even new lines with central government backing have sometimes failed to get provincial acceptance. For example, the UHVDC Sichuan Number Four line would take Sichuan hydropower to Jiangxi province, and was singled out for construction in the 13th Five-Year Plan (2016-2020). But as NEA officials noted last autumn, Jiangxi does not want this power.”

The great exception is Tibet, which still has a command and control economy, where the central party-state can still simply allocate resources. This is the actual circular economy in operation, not an economy of reduce, reuse and recycle, but a circle of state-directed capital expenditure, from NDRC to TAR to the dam and grid builders; from the state at national level to provincial level to the corporate state.

Where will the new dams be located? Outside of TAR, in the rugged terrain of Kham, eastern Tibet, dam building, on a massive scale continues, with dams –highest in the world- above 300m of concrete across steep mountain river gorges in highly earthquake prone districts. 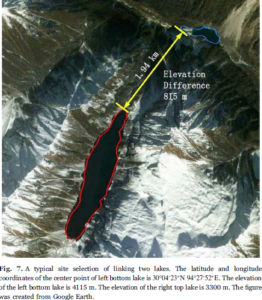 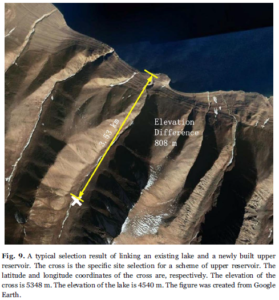 Within TAR, as solar power starts to become more common, where are the paired lakes designated as batteries to store solar power? Chinese engineers have this surveyed and mapped. Conveniently, this can be done from a desk in Beijing, with no need to actually visit Tibet. Satellite cameras in orbit above the earth are good at measuring the distance to the ground, so it is not hard to locate those paired lakes, one higher than the other, close enough to constitute a system for pumping up and rushing down, according to grid demand.

However, there just aren’t enough lake pairs sufficiently close to each other with sufficient height difference, so the scientists played round with identifying terrain around existing lakes where engineers could build a reservoir above the lake to pump lake water up; or below the existing lake, forming a dyad forever cycling together.

Then they mapped the various possibilities, also noting the distance of these water battery systems to the nearest grid, and the inevitability that the state would need to step in and finance the heavy infrastructure required, both the extra reservoirs and the grid connections. Another florid tech fantasy is born: Tibet is a fertile landscape onto which to project grandiose tech visions. 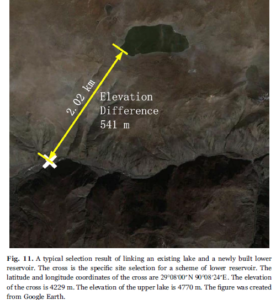 If only a small proportion of the hundreds of sites labelled suitable for pumped storage hydro dams all over Tibet are ever built, and connected by power grids to each other and to lowland China, how many Tibetans will be displaced? How many teams of Han Chinese immigrants will be sent to remote valleys to construct this renewed vision of engineering Tibet?  The National Development & Reform Commission, in March 2018, issued detailed instructions on how those displaced by hydro dams are to be emigrated, compensated and treated with respect. Is this about to happen in

The Tibetan Plateau has fascinated and fixated China’s hydropower planners for decades, as the resource China most needs to extract, and then export, not only to lowland China to the east but also to the south, to Nepal or beyond, all by UHVDC ultra-high voltage direct current power grids. As recently as 2009 Chinese engineers enthused: “According to the results of the national hydropower review, the theory of hydropower resources reserves in Tibet account for 29% of the country, ranking first in the country, with annual power generation developable of 576 billion kWh, second only to Sichuan Province, ranking second in the country. Tibet will become the main battlefield of China’s hydropower construction after 2020, first of all from Sichuan and Yunnan, utilising The Jinsha River, Minjiang River and Nujiang River to transfer electricity from the eastern part of Tibet.”[1] 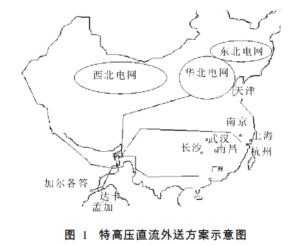 Those dreams of overpowering Tibet remain, especially on the fast mountain rivers of Kham, in Sichuan, but dam building has been slow, and in TAR has halted, except for the Zangmu dam. Now, it seems, due to a directive from the highest level, backed by ample finance capable of overcoming the deep corporate indebtedness of some of China’s biggest energy companies,[2] central Tibet may soon see a new burst of hydro damming. 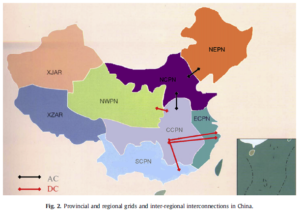 State Grid, by any measure worldwide a massive corporation, announced in 2017 it was upgrading the existing grids in TAR, which seldom had capacity to transmit more than 110kV, to be increased to 500kV, while interconnecting the separate grid networks of eastern and southern TAR. 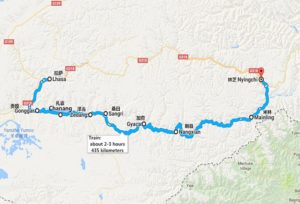 In announcing this upgrade, State Grid emphasized how important it was to safeguard the new rail line from Lhasa to the luxury resort district of Nyingtri, so close to India’s Arunachal Pradesh. The single track line needs electricity to fulfil its promise of reducing an eight hour bus ride to three hours on a train that stops at only a few of the 17 stations, moving at 160 kms/hr through tunnels as much as 17kms long and bridging the Yarlung Tsangpo just above the Zangmu hydro dam. With so many bridges and tunnels, and fast speed, reliable signalling is essential for safety, requiring failsafe electricity supply, as State Grid points out. 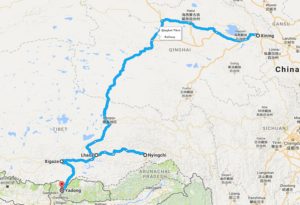 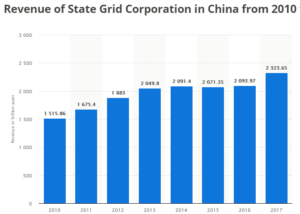 The intensification of central Tibet is regaining momentum lost in recent years as TAR fell back to its command and control default position. State Grid has not forgotten its vision for Tibet, as its boss Liu Zhenya put it in 2012: “Hydropower will be developed in Tibet and transmitted to other regions on a large scale. Power generated in the large hydropower bases will be transmitted from Sichuan to central and eastern China, and from Yunnan to Guangdong. The volume of hydropower from the southwest region will reach 54.5 GW (gigawatts), 76 GW and 120 GW by 2015, 2020 and 2030 respectively.”[3]

State Grid has been adept at keeping pace with official China’s changing priorities. Whatever problems China has, State Grid is always the solution. When the top priority in TAR was industrialisation and mineral extraction, State grid built the first power networks. Now the agenda is beefed up securitisation of the borders with India, and a tourism consumer economy, especially in the Nyingtri county, requiring the interconnection of local grids and sharply upgrading the voltage. Above all, State Grid has never lost sight of the prospect of Tibet at last paying its way for China by exporting electricity, using electricity from afar 电从远方来 the catchy State Grid slogan.

The TAR government, if it ever doubted if it really needs such a massive grid upgrade, is in no position to argue with State Grid, whose 2016 revenue of 2093 billion yuan was 13 times bigger than the total RMB 158 billion revenue of the TAR.

TAR pioneered grid management, the securitisation of Lhasa, divided by gridlines into small units of intensive hi-tech surveillance, monitored by cameras and informers to ensure behavioural compliance with CCP policy in all public, and many private spaces. Grid management is the strategy enabling the party-state to implement its “social credit” system of punishing those deemed untrustworthy by the all-seeing security state, and rewarding the compliant.

Until now grid management and State Grid seemed to have little in common. But if State Grid, funded by the National Development & Reform Commission to build high voltage power grids all over Tibet, incentivises the hydro dam builders and pumped storage battery builders, then Tibet becomes an electrified post-industrial security state like never before.