In the first days of the Paris global climate treaty negotiations, China had a dream run, no longer the villain obstinately undermining any agreement, as happened in 2009 in Copenhagen, the last time the world tried to agree on what to do.

China has had six years to project an image of good global citizenship. When China announced to US President Obama that its emissions would decline after 2030, everyone (starting with Obama) hailed this as a breakthrough that signalled prospects for success in Paris.

What China actually promised was that its’

emissions will continue to rise, all the way to 2030, and then start to decline. No specific amounts of greenhouse gases and other pollutants were named, just a commitment to reduce energy intensity per unit of GDP, a tricky yardstick which can enable China, as its economy and especially its services economy grows, to meet the target without actually reducing emissions at all, since success is to be measured not by absolute tonnages of carbon spewed skyward, only those emissions per unit of a GDP that by 2030 will include not only heavy industry but casino gambling, golf courses, mass entertainment, banking and other services expected to boom over the coming 15 years.

None of this was apparent, in the optimism of the first days of Paris COP21. Everyone badly wants an agreement to happen, even if it is not a treaty, even if there is no enforcement mechanism, even if it relies solely on each country making its own declared goal, and even if all those goals don’t add up to a planetary warming of two degrees max, as much as the planet can take.

China has become part of the solution, one of the good guys, even if few wanted to look at the fine print. The world’s biggest environmental NGOs, all with offices in Beijing and close relations with China’s official agencies, amplified this message. No-one wanted to rain on the parade. China’s diplomacy, and soft power projection, have been more adroit and more successful than India’s. India actually emerged, quite quickly in media coverage, as the likely bad guy, the “deal breaker”, since India’s stance is a blunt rejection of responsibility for historic carbon emissions, and a demand that, as a growing emerging economy, it needs to burn much more coal.

Oddly, that is actually China’s position too, only media coverage doesn’t seem to have noticed. China insists on its exceptionalism, and on being a developing country, even the leader of a bloc formally known as G77+China, which has over 130 countries who vote en bloc. In Paris, behind the scenes, China continues to insist that any form of international scrutiny or accountability is an intrusion on China’s domestic affairs. China objected on 2 December to an EU plan to monitor emissions from ships in Chinese ports, their engines running as they wait to load or unload.[1] The UN International Maritime Organisation had proposed collecting data on emissions from ships in port, but China objects.

China has reverted to its long-held position that it did not cause the change in climate; it is the responsibility of the countries that industrialised earlier. As The Guardian reported: “Su Wei, China’s head of delegation, argued that rich countries like the US, Britain and Germany should not be allowed to evade responsibility for their historical emissions. ‘The basic facts do not change. The problem has been caused by developed countries. They need to take their historical responsibility into account and take the lead in reducing greenhouse gases’, he said.”

That has been China’s position all along, and that is what wrecked the Copenhagen negotiations in 2009, which tried to face up to the changed reality that certain developing countries are now major industrial powers, and major polluters. If China persists in denying responsibility, insisting in exceptionalism, declaring itself to be (in this context) the same as Botswana or Honduras, the deal will come undone. But now everyone is so utterly determined that there must be a deal, it will go through, by choosing not to notice how little China is offering the planet.

The next day, in negotiations over key issues, such as whether any agreement will be legally binding, and whether developing countries will be exempt from cutting emissions, two of the poorest countries, Sudan and Tuvalu, proposed adding a clause allowing developing countries “willing to do so” to opt into global obligations to cut emissions. China and India immediately objected to any such phrase being included.[2]

China’s plan is to grow and go on growing as fast as it can, and that growth remains the number one priority, with environment second. China in its 13th Five-Year Plan that takes it to 2020 aims to grow by seven per cent a year, enabling it to meet its target of doubling GDP in one decade, from 2011 to 2020, whereupon it will at least drop all pretence of being a “developing” country and proudly announce its arrival as a high-income country. This is all explicitly stated in the documents of the 13th Five Year Plan.

China imposes on its citizens a burden of disease, and shortened lives, because it burns more coal than the rest of the world put together. Beyond China, the carbon emitted by coal burning, the toxic metals in coal and the fine particulate matter pumping into the air by coal combustion all become a global climate heater, and a global health problem. China cannot say this is China’s internal affair: we all breathe the one global atmosphere, which, as Tibetan lamas have pointed out, is taken for granted as an immediately available dump, precisely because there is so much of it. We pollute the air because it just seems to disappear.

Tibet is now especially vulnerable to China’s coal pollution, as China moves so many industries deep inland, to Xinjiang, upwind of the Tibetan Plateau. Xinjiang now has even worse fine particulate matter (PM2.5) pollution than China’s east coast, because of all the new coal-fired power plants China has built there. Most of the year, the winds blow from Xinjiang towards Tibet, carrying radioactivity from the nuclear blasts of earlier years, and now the PM2.5 pollutants that are so fine they pass through lung walls and into human bloodstreams. At a Coal Cap conference in Beijing in November 2015 Dan Greenbaum of the Health Effects Institute mapped exactly where the worst air pollution now occurs: 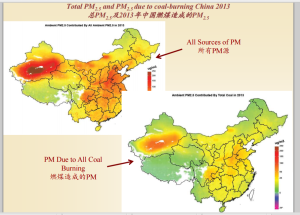 China likes to portray Tibet as pristine and unpolluted. Not any longer. Tibet now experiences the full spectrum of costs of global warming, and none of the benefits.

And China continues to get away with its vague promise to start reducing emissions by 2030. Scientific research on exactly what that means shows us that, firstly, China’s emissions will continue to rise until 2030, and then will only decline significantly if China’s growth rate also declines from the planned seven per cent per year, down to one or two percent, which is the level of most countries worldwide in recent years.