BLOG TWO OF THREE ON THE WORSENING OZONE HOLE OVER TIBET 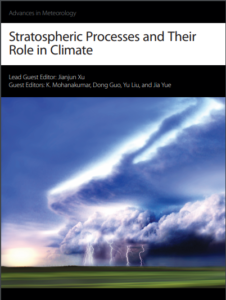 What is at stake is the viability of human life, all sentient life, indeed all life in Tibet, right across the Tibetan Plateau.

Life on earth exists because life created the atmosphere of the planet, generating the benign environment for the flourishing of all forms of life. A planetary envelope of air with enough oxygen for animals, enough nitrogen and carbon dioxide for plant and aquatic growth, enough CO2 to keep the planet warm but not too hot, and enough ozone to keep out ultraviolet radiation from causing skin cancers and cataracts, is not the outcome of  just physics. It is the collective exhalation of all life on earth. 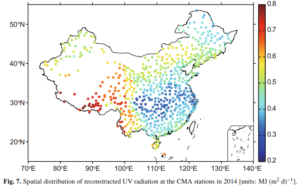 That ozone is generated in the tropics, and global atmospheric circulation takes it to shield the poles. That is one insight learned by the scientists who discern the single planetary system that is our collective atmosphere. We are all intimately connected by the air we breathe, as the Tibetan lamas have always reminded us, so to pollute the air where I live is to spit in your face.

Nowhere is more vulnerable than Tibet. Of the three poles, only the Tibetan Plateau is fully inhabited, by the six million Tibetans plus, these days, four million immigrants from lowland China, on 2010 Census figures.

The Arctic experiences worrisome drops in protective ozone levels only intermittently. The Antarctic, uninhabited except by scientists, gets nearly all the ozone attention, precisely because it is a science research hub, and ozone remains a core scientific focus of research, even when public interest in ozone peaked and faded. Further, the ozone hole extends occasionally into Argentina, Chile, Uruguay and even, sometimes, into southern Brazil. 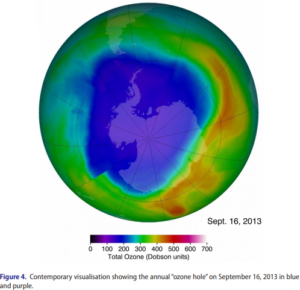 Although it is Antarctica that gets by far the most attention, it is the Tibetan Plateau that is most worrisome. If the world largely forgot about ozone, it has totally forgotten the ozone hole that appears every spring above the Tibetan Plateau. Even Tibetans don’t know much about it.

Scientific focus is overwhelmingly on Antarctica, whether one searches ozone on Google or academic databases, to such an extent one might think Tibet is a minor sideshow. This is not so. There is much, in obscure academic journals, such as the journal Plateau Meteorology, 高原气象,   that comes six times a year, since 1982, which has published 13 articles on ozone starting in 1991. Ozone levels over Tibet have been measured since 1958. 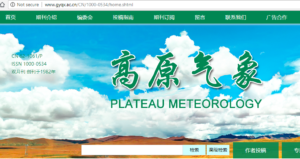 Most such research findings are only in Chinese, and China has done almost nothing to educate Tibetans about the dangers of the ozone holes letting in toxic ultraviolet radiation, so ordinary Tibetans know little, even though scientific research on the Tibet ozone hole (or ozone valley as Chinese scientists call it) abounds.

To be born in Tibet is to experience the precariousness of life, with few modern interventions. As The Lancet said in 2016: “China can in fact be divided into five distinct so-called nations based on the epidemiological characteristics of each. In Shanghai, Tianjin, Zhejiang, Beijing, Hong Kong, and Macao, mortality rates are low and life expectancy is high even compared with high-income countries. In Jiangsu, Hainan, Guangdong, Fujian, Hubei, and Hunan, life expectancy is relatively high because of low rates of ischaemic heart disease and stroke mortality, but rates of cancer and COPD mortality are high. In a third group of mainly north-eastern provinces (Shandong, Jilin, Liaoning, Shanxi, Shaanxi, Henan, Anhui, Hebei, Inner Mongolia, Heilongjiang, and Ningxia), life expectancy is in the mid-range of all provinces, with high levels of mortality due to ischaemic heart disease, stroke, and cancers. 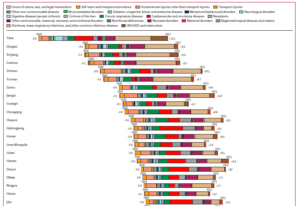 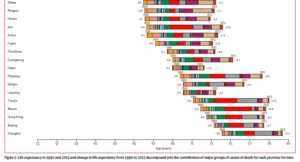 Although many Tibetans don’t live long enough to get cancer, it is increasingly common, especially as China does little to discourage smoking. Despite the many barriers to accessing health care, Tibetans are gradually living longer, and cancers become more common. 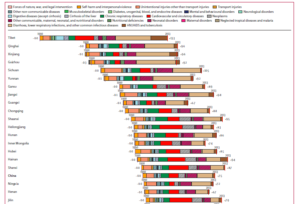 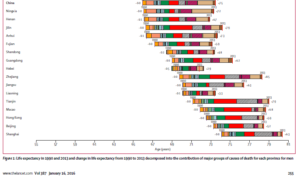 Shigatse People’s Hospital has emerged as a key centre for evaluating the new immunotherapy treatments for cancer, even though the only Tibetans who could pay for such treatment are the yartsa gumbu caterpillar fungus millionaire traders.[3] Who else could finance treatments costing $100,000 or more a year?

This is not an auspicious time to discover an intractable, recalcitrant ozone hole above Tibet. 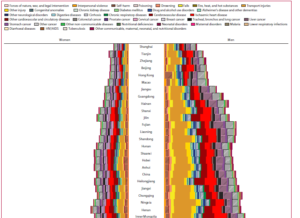 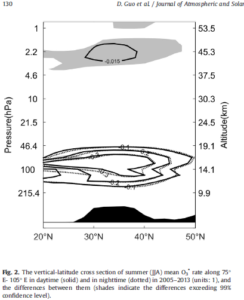 Since the Tibetan Plateau floor is itself four to five kms above sea level, it reaches so far into the sky it is naturally half way up to the lower, and bigger, ozone hole. The altitude of Tibet makes its naturally prone to ultraviolet radiation that is more intense than elsewhere on earth. It was only in this century that the prevalence of blindness among Tibetans was surveyed, and its causes. The result of a large scale survey near Lhasa of Tibetans 40 or older showed 8.43% are blind, and cataracts, exacerbated by exposure to ultraviolet radiation, was the cause of 55% of blindness, even though cataracts are readilyremediated surgically.[5]

Tibetans are also bombarded with ultraviolet rays to the skin, a primary cause of skin cancer. Traditionally, Tibetans are outdoors a lot, especially pastoralists. In 2009 a team of Tibetan and Norwegian scientists, building on research in the 1990s by a Tibetan researcher Phurbu Tsering[6] (in Chinese Pu Bu C R) reported: “Because of the high altitude of the Tibetan plateau, most UV-controlling parameters are favourable for transferring UV radiation to the surface, making the UV environment on the plateau quite unique. In this paper, the main focus is on presenting results from three and a half years of measurements of UV-B radiation in Lhasa, Tibet. Thus, during spring and early summer relatively large values are recorded. The high level of the UV-B radiation during the growing season may be harmful to living organisms. The UV-B dose rates during the summer on the Tibetan plateau are among the highest at any habituated place in the world. But the amount of harmful UV-B radiation received in Lhasa during the growth season is higher than that received in equatorial regions in Africa.”[7] 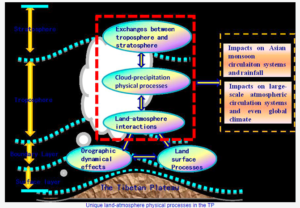 They point out that a cloudy day does not shield sentient beings from UV radiation, and may actually increase exposure. In 2009, another Tibetan and Norwegian science team reported that Tibetans, knowing excessive exposure to the sun is damaging, limit direct sunlight on skin, though it is essential to creating needed vitamin D in the body, and those nomads are the most careful.[8] Nomads are well aware of the damage to skin the sun can do, and have long used the whey that separates itself from sho, Tibetan yoghurt to protect themselves.

How can Tibetans now protect against the ozone hole? What can Tibetans in exile around the world, and their friends, do ensure the Third Pole ozone hole attracts the attention it deserves?

The third in this series of three blogs discovers an opportune moment, amid the trade wars, to protect Tibet. 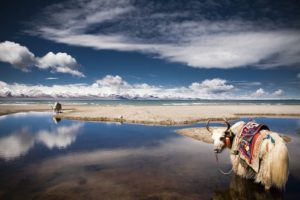 Distribution of Ozone Valley and Its Relationship with Solar Radiation over Qinghai-Tibetan Plateau,