CHINA’S “LORD OF THE RINGS”, FILMED IN TIBET, FLOPS

Alibaba, itself a corporation named after a fabled faraway, sank $100 million in the making of Asura, which has just crashed at the China box office. Billed as China’s Lord of the Rings, this fantasy epic, filmed partly in Amdo but mostly on computer, was meant to launch Chinese movies to a global audience and be the first in a trilogy. On its first midsummer weekend this stunt-laden spectacle performed so poorly, it was withdrawn and may never be heard of again. 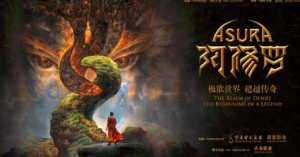 As its’ faux Sanskrit graphics suggest, Asura borrows/appropriates boldly and indiscriminately from Buddhist psychology, starting with the title, referring to the realm of the jealous gods whose life of luxury and indulgence is ruined by envying those in the realm of the higher gods. To Tibetans and Chinese Buddhists, entry into the jealous god realm after exiting this life is a dead end, because the enjoyment of every available sensuous pleasure is spoiled by gossip, jealousy, scheming, trolling, flaming. That sounds rather like Hollywood celeb culture.

Chogyam Trunpa: “The realm of the asuras is highly energetic, almost in contrast to that state of spiritual absorption. It’s as if somebody had been far away a long time from their civilization, in the middle of a desert island, and they suddenly had a chance to come down to the nearest city. Automatically, their first inspiration, of course, would be to try to be extremely busy and entertain themselves, indulging in all sorts of things. In that way the energetic quality of busyness in the realm of the asuras develops.” 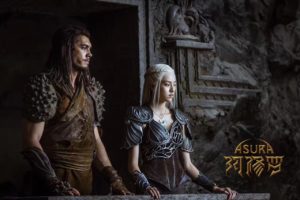 In the hands of a stunt coordinator turned movie director this could be the basis for a hit, not only with Chinese audiences but globally, as the cast features plenty of nonChinese actors. That was the plan. But the stunts and the tech wizardry got the better of any semblance of characters audiences can identify with.

For starters, Asura (actually axiuluo in Chinese) is literalised as a person, who has three heads and three personalities, and not latex heads but thanks to the code cutters, three grafted heads pulling this ruler in differing directions, none of which we care much about. Spectacle is all. 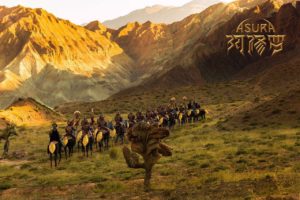 And the Amdo backdrops are pretty good.

The movie’s producers, in publicising its midsummer release, emphasized that the plot is based on unspecified Tibetan Buddhist mythology, as if that endears the asura realm, like Tolkien’s Shire of medieval England’s rural origins. Top CCP officials from Ningxia province, base of the movie’s makers, attended a special advance screening. Not even a classic hero, destined to win back his kingdom, played by a 19 year old hot heart throb, Wu Lei, could save this attempt at instant myth. He plays a herdsman, but don’t for a moment think this too is a nod to Tibet, to the drogpa pastoralists who (still) use the actual Qinghai landscapes in the movie to pasture their yaks, sheep and goats. This herdman is dressed to look more like an extra from Life of Brian, from a sword and sandal epic of the Euro mythos of lost origins, a shepherd destined for greatness. 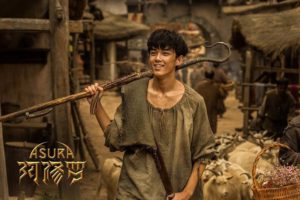 But when screens all over China opened, paying customers stayed away. Asura seems to have fallen into its own jealous god realm, overwhelmed by online negativity, a torrent of trolling from the wangluo shuijun, literally “internet water army” who earn money by trashing reputations, a major industry in today’s China. They are the market economy equivalent of the 50 Cent Army (五毛党),  of internet commentators (Chinese: 网络评论员), hired by Chinese authorities to manipulate public opinion to the benefit of the Chinese Communist Party. 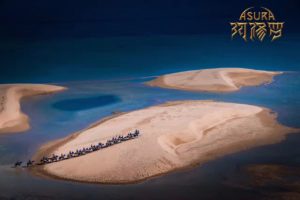 By trying to appeal to all audiences, this movie appealed to no-one. But the producers, swiftly cutting their losses, perhaps in the hope a re-cut might yet save them, instead blamed the trolls.

A fast action movie cut down by the fast action online assembling of negativity.  An artefact of today’s tribalised factional world undone by tribalised jealousy. An evocation of the realm of unlimited desire brought low by unlimited anger. That’s what the lamas tell us is what happens to we wanderers in samsara all the time. 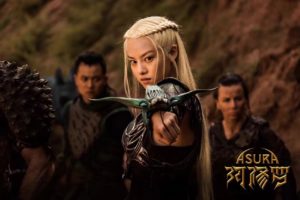 If that is what tanks in today’s China, what succeeds? By far the most profitable and popular Chinese movie is Wolf Warrior 2. Apart from the American villains and largely anonymous African victims, this is an all-Chinese movie, with plenty of violence, culminating in the arch-villain Big Daddy, who we viewers have come to hate, arrogantly declaring there are only two kinds of races in the world: winners and losers.  Big Daddy snarls: “People like you will always be inferior to people like me; get fucking used to it” (这个世界只有强者和弱者; 你们这种劣等民族永远属于弱者; 你必須習慣). At this point, heroic Leng, who has been losing the fight, suddenly gets up on his feet, punches back, and says “that’s fucking history” (那他媽是以前), before beating his white opponent to a pulp. That’s what works in today’s China.